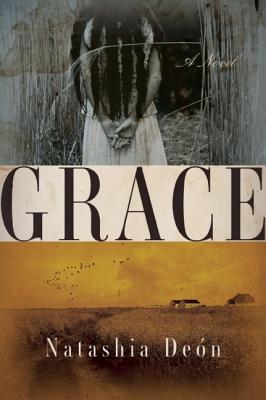 I have been itching to read GRACE ever since I heard Natashia Deon read a bit of it at David Rocklin’s ROAR SHACK a few years back. This was someone who clearly knew how to create scene, cared about language and the voice of the book had clear, strong, narrative clarity and control. I always tell my students that the key to voice is creating a voice so strong that the reader feels in good hands. From what I’d heard, I was definitely in good hands.

Once I got a hold of GRACE I was not disappointed, the book is hard to put down. From Naomi’s first line,

…the voice has such strength and assuredness that you have no choice but to sink into the narrative and absorb it.

Starting with your narrative character dead is nothing new, but Deon takes it one further. Because of her predicament, Naomi can observe several characters’ stories. She spends the book telling her story, and the story of her daughter, over whom she watches as things unfold. But she can also, without the glibness of an omniscient narrator, fly around and observe things happening in different environments that will affect her daughter. Through this tool, Deon manages to let Naomi tell several other people’s entangled stories herself.

I tell my students that as long as you keep the reader oriented, you can get away with a lot. And Deon is masterful at keeping us anchored in a complex array of characters in a voice that creates its own rules and sometimes bends them a little. Naomi has these “flashes” of hindsight, portions of her life that unfold more fully in narrative than they did when she was living them. It launches the reader, much like that long view in magical realism, into a broader overview than the character would be capable of observing on her own:

You may never know.

Naomi can then, because we feel we are in capable hands, fly over into the world of a character who, without her knowing, will change the course of not only her life, but of her daughter’s. This is not her ghost being conscious of the world as it unfolded to her during her lifetime. This is a “flash” of a more fully realized hindsight from her ghost consciousness-perhaps a broader sense of things a soul can have once freed from its body. And this is deftly handled.

The narrative devices result in a richly layered story that is laid against not only the cruelties of slavery, but that volatile difficult time after Abraham Lincoln declared the slaves free, but in the South it wasn’t to be a reality until a few years later after several bloody battles. And the repercussions of the cruel system that spawned slavery still haven’t completely passed as of today, a consciousness that is woven carefully into this period piece.

Within Naomi and Josey’s story is that of Charles, whose life is central to both of theirs as well as the stories of Cynthia and Annie, two different morally complex white women doing what they can to survive not the repercussions of the war, but trying to live life on their own terms in a time that simply wouldn’t allow for it. In that lost moment of war between old and new, they slice out a bit of life by use of their wits and their bodies. Cynthia and Annie are so wrapped up in their own problems they have no idea that their whims and often careless decisions can change, even destroy people’s lives. And their ripple affect through the delicate web of two generations of women around them creates a solid portrait of the danger of unconscious white privilege which, while shown in the past, can easily be applied to the present.

With all of these characters, and Naomi’s ability to glide in and out of their lives as they unfold, Deon can deal with issues of gender roles, slavery, race, powerlessness, love, family, power struggles, individuality, strength and of course grace, all while keeping us rapt in the language of her storytelling.