Both are balmy, sun-soaked locales. Both are surrounded by hills and ridges, switchbacks and shorelines. And both are situated on tenuous earth that threatens to break off and drift into the sea. But the similarities end there for Porto Vergogna, Italy, and Los Angeles, Calif., the two main settings of Jess Walter’s “Beautiful Ruins.”

One is a “rumor of a town,” inhabited mostly by anchovy fisherman and their families. The other is a glittering panorama of “green-and-glassed hills,” where “every table is sporting a sullen white screenwriter in glasses, every pair of glasses aimed at a MacPro laptop.” Together, the two places form the yin and yang of this novel, the opposing but complimentary forces that make this book work.

First there’s Porto Vergogna, a place where people arrive deliberately. “The dying actress arrived in his village the only way one could come directly — in a boat that motored into the cove, lurched past the rock jetty, and bumped against the end of the pier.” (p1)

The few visitors who do come to Porto Vergogna and its one crumbling hotel are seeking more than simple rest and relaxation. They arrive for spiritual recovery and redemption. One of the characters, in describing what makes the location so special, says, “‘Here, on this coast, your walls were made by God — or volcanoes. You can’t tear them down. And you can’t build outside them. This town can never be more than a few barnacles on the rocks.’” (p63) The people here are constrained by the rules of a higher power.

On the other hand, Los Angeles, our second setting, is a place where religion has been co-opted by men. One character describes his pilgrimage to Los Angeles like this: “Weren’t movies his generation’s faith anyway — its true religion? Wasn’t the theater our temple, the one place we enter separately but emerge from two hours later with the same experience, same guided emotions, same morals? … Flickering pictures stitched in our minds that became our shared history, that taught us what to expect from life, that defined our values. What was that but a religion?” (p21)

Claire, one of the main characters, shows up for a job interview, only to be asked, “Claire, how much do you know about Scientology?” (p23)

Los Angeles is perplexing and illogical. One of the characters is perpetually confounded by the sprinklers that go off at 5 a.m. each day to water piles of rocks. “Before sunrise — before Guatemalan gardeners in dirty dinged lawn trucks, before Caribbeans come to cook, clean, and clothe, before Montessori, Pilates and Coffee Bean, before Benzes and BMWs nose onto palmed streets and the blue-toothed sharks resume their endless business — the gentrification of the American mind — there are the sprinklers: rising from the ground to spit-spray the northwest corner of Greater Los Angeles, airport to the hills, downtown to the beaches, the slumbering rubble of the entertainment regime.” (p15)

Also, unlike Porto Vergogna, this is not a place that requires deliberation, a place that necessitates the skill of experienced sailors over choppy waters. Rather, it is a city that zombies could navigate. “Her commute to the studio is a second-nature maze of cut-offs and lane changes, shoulders, commuter lanes, residential streets, alleys, bike lanes, and parking lots, devised to get her to the studio each day precisely eighteen minutes after she leaves her condo.” (p24)

The Italian city makes no promises. It is humble. “Porto Vergogna was a tight cluster of a dozen old whitewashed houses, an abandoned chapel, and the town’s only commercial interest — the tiny hotel and cafe owned by Pasquale’s family — all huddled like a herd of sleeping goats in a crease in the sheer cliffs … The hoteliers and restaurateurs to the north had their own pet name for the tiny village pinched in the vertical seam: baldracca culo — the whore’s crack.” (p2) There is just one place for lodging, The Hotel Adequate View, where expectations are lowered so they are forever exceeded.

In Los Angeles, those who follow their dreams almost certainly find a ruinous end: “He got caught in several traffic snarls and took the wrong exit. By the time the security guard shrugs and informs him that his destiny is at the other gate, he is 24 minutes late.” (p35)

In Porto Vergogna those dreams — no matter how frivolous or ridiculous — are met with support, even admiration. “With nothing but steep cliff faces to work with, Pasquale knew that a golf course was out of the question. But there was a natural shelf of three boulders near his hotel, and if he could level the tops and cantilever the rest, he thought he could build forms and pour enough concrete to connect the boulders into a flat rectangle and create — like a vision rising out of the rocky cliffs — a tennis court.” (p6)

There are two distinct story lines that run parallel throughout “Beautiful Ruins” and finally meet in the end, and neither one of those story lines could have existed without the other. The romance that blooms in Italy would not have happened without the Hollywood dreams; and had there been no ambition for fame and fortune, a hotelier in Italy would have never had a shot at love with an American actress. This was only made possible by Walter’s masterful use of two contrasting locations that formed a more dynamic, balanced ecosystem. 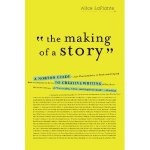 I must have about fifty trade-edition writing craft books on my shelves, but I still keep buying them, in search of some hidden magic that will help me as a writer, or a clearer articulation of some venerable craft topic (like POV) that I can steal—I mean, emulate—to improve my own teaching. For a long while, I avoided textbooks at all costs: too impersonally written, too dense, too much under one cover, and those bland discussion questions scattered throughout, reminding me not of college, but of high school–yuck. But the more I teach, the more I accept that textbooks do have a place. If only they weren’t so ridiculously expensive!

This newer one by Alice Plante (author of the novel, Turn of Mind), I am happy to say, is not. Marketed, priced, and designed as a general reference but structured as a comprehensive textbook, LaPlante’s 677-page guide covers creative writing process and composition strategies (including purpose of writing, coming up with ideas), craft (characterization, narration, scenic construction, point of view, dialogue, beginnings, revision), and anthology (learning from masters, with full texts of 26 short stories and nonfiction essays).

While focused mainly on fiction, a limited number of anthologized works and one chapter at the end are dedicated to creative nonfiction, and LaPlante frequently makes mention of ethical concerns and crossover issues between the genres. She also uses a nonfiction essay by novelist Francine Prose to elucidate creative writing concepts. Numerous shorter passages from notable authors are also used as examples throughout each chapter. Generative exercises are provided, as are strong examples of students’ responses to the exercises. Not included are more conventional textbook-like discussion questions at the end of each chapter. Instead, a general questioning tone and points to consider (for example, “is it possible to define a short story?”) are woven throughout the discussions of craft.

The elements covered and stories anthologized position this text as appropriate for both undergraduate and graduate study, while the personal voice and non-dogmatic, highly readable text as well as non-textbook style design throughout seem to aim for a wider, general audience. (Not to be overlooked is the more affordable price, $21.95 for the first edition, in comparison with expensive textbooks with similar craft and anthology content, such as Burroway’s Writing Fiction, 8th edition, priced at $96.33.) Discussion of craft is pitched at a sophisticated level, with a spirited, opinionated tone and an occasional emphasis on debunking writerly myths or oversimplifications, as well as an openness to questions that have no easy answers. On the subject of metaphor exercises, for example, LaPlante (a successful novelist as well as experienced teacher) is refreshingly unapologetic (123): “There is absolutely no way to do a metaphor writing exercise, because that defeats the purpose. If it doesn’t come up organically, within the creative process of the story, then it isn’t worth anything. Its only value is within context.”

Technique overviews that stand out as more distinctive or nuanced in comparison with many classroom-oriented writing guides include LaPlante’s  discussion of imagery that works at both the concrete and abstract or emotional level (chapter 3); a defense of narration and a clearer explanation of the showing-telling continuum (in contrast with the too-often quoted simplication, “show don’t tell,” (chapter 5) including bolded passages by authors Smiley, Proulx, O’Connor, Hemingway, and Wolff that help the reader distinguish between showing and telling; a more rigorous explanation of the unreliable narrator and types of reliability (chapter 7); explanation of story versus plot (chapter 9); and the art of transferring true emotions onto sensory events (chapter 12). LaPlante is candid about drawbacks to the workshop method, and carefully defines the multiple developmental stages of a creative work, advocating a more cautious approach to the giving and receiving of feedback, as well as a more process-oriented “anti-workshop method” (551) for “exploding” works in progress using exercises, in contrast with product-oriented editing or polishing. By contrast, a less distinguished chapter on characters (chapter 10) included mostly pedestrian explanations (flat versus round, general versus specific, wants and needs) and few surprises or insights in comparison with other craft chapters in this book.

More commonly anthologized story choices in this guide include Chekhov’s “Lady with the Little Dog,” Cheever’s “The Swimmer,” and Hemingway’s “Hills Like White Elephants,” as well as stories by Lorrie Moore, Maxine Hong Kingston, and Raymond Carver, and the much-anthologized “Shitty First Drafts” essay by Anne Lamott. There are also some less-obvious choices, including Katha Politt’s “Learning to Drive,” plus a nonfiction essay by D. T. Max about the Raymond Carver-Gordon Lish editing relationship.

In my own teaching, I will consider LaPlante’s guide as a strong alternative to better-selling textbooks. I appreciated in particular the voice used to address writers at all levels (complex explanations clarified by well-chosen examples, without condescension), more nuanced craft discussions on elusive topics, strong examples of student writings (which would help me choose between exercises and frame my own expectations for student work), and the inclusion of creative nonfiction examples and issues within the larger discussion of fiction craft. Bravo to LaPlante, and to Norton, for putting out a more affordable textbook-style reference guide that any writer in any setting can use.