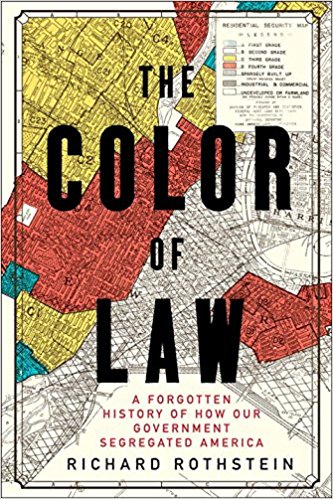 There is a historical narrative I’ve always interpreted as true. In it the Southern States played the role of the evil ones while the Northern States played the role of the good guys. I came of age clinging to the notion that Southern Whites and their state governments were to be feared while Northern Whites and their state governments were liberally righteous in their fair minded measured approach to race relations. It is painful to have such a late awakening to the insidious facts. Richard Rothstein’s The Color of Law is just that—a late awakening.

Race has always been a chip played for gain in our Democracy. A pawn on the chessboard, used to keep the Union appeased and unified. The progress of African Americans has been in part held hostage to a larger political game.

The evidence that my thinking was flawed has always been there. Historically, all States were run by the inheritors of European settlers—save for the period of reconstruction when the South was forced to share power. Still, the legacy of slavery and Jim Crow with its blatant terroristic tactics, encouraged a continued belief in this original and more traditional narrative. Alas, the world is far more complicated than a young woman’s fantasy.

On a level of craft, The Color of Law is a well-researched textbook detailing the inherent biases found in American housing practices. Using examples of deliberate social practices as well as legislation, Rothstein explains why and how American cities and towns continue to remain segregated.  My hope is that his book becomes a standard for the continued examination of a set of systems put in place to perpetuate African American disenfranchisement.

Beginning with a description of segregated San Francisco, each of the twelve chapters focuses on a different aspect of the organization of segregation fostered by local, state and the federal government alike.

I take these revelations personally. Because I knew it was the Federal government that fought to enact civil rights then voting rights and finally anti discriminatory housing policies in the form of the Fair Housing Act, I always sided with the U.S. Government over the argument for States Rights. It was the racist practices of the Southern States that subjugated people of color. They were the villains. However, Rothstein’s research puts a lie to the narrative that institutional racism was the exclusive province of southern states.

Each chapter reveals a well-researched litany of rules, ordinances, laws and behaviors, which I define as the practices of exclusion. They included but were not limited to restrictive covenants, redlining, discriminatory lending and white flight. Many of them were unspoken social contracts which resulted in keeping white neighborhoods homogeneous while perpetuating the continued isolation of African Americans. These practices of exclusion resulted in the limiting of educational opportunity and the overall stagnation of economic upward mobility.

People have an ability to exist and move forward despite blatant discriminatory practices. I do remember over hearing the talk of death threats our neighbors Mr. and Mrs. Grant received when they attempted to purchase a Levittown home. The Grant’s were two of the day people I describe in my memoir. Devoid of the insidious pathologies that inflicted some public housing families, when they escaped the projects, it was to a brownstone purchased in all black Bedford Stuyvesant Brooklyn.

Though they didn’t talk about it with their children, my parents must have known. Having left Jim Crow behind, perhaps they were simply satisfied with the housing accommodations made available to them. They certainly accepted those accommodations. So, I don’t know what my parent’s felt at the time. However it is the laws on the books they didn’t know were there, the secret agreements between financial institutions and business establishments, the places of employment set up to exclude them and other subtly coded racist practices that catches me in the throat. These facts create a queasiness in me now, years later, merely for being so naive.

Ta-Nehisi Coates’ article “The Case for Reparations” gives a very informative overview of these practices. However, the uniformity and pervasiveness illustrated in Rothstein’s tome is enough to justify the general belief in popular African Americans conspiracy theories, like the U.S. Government’s spread of crack cocaine and HIV/AIDS within black communities in order to keep Black people down.

And yet the more I examine the disparate confluence that make up American society, the more I understand this democracy to be—as many others have noted—simply an ongoing experiment. That Jefferson’s words  “We hold these Truths to be self evident that all (men) are created equal…” is nothing more than a fragile ideal. One that we citizens will keep attempting and failing to attain.

Whether FDR, the Father of the New Deal, was himself a racist believer in white supremacy, a gifted and pragmatic politician and public servant or some combination of both is beside the point. The results of the laws and practices he and many others promulgated have fostered a huge gap in financial prosperity and resources within our society. It has affected levels of education, incarceration and the overall well-being of an entire subsection of the American populous. Yet there’s an irony as well, that since emancipation and despite the pervasiveness of the practices of exclusion, the United States has made real and demonstrable progress. The Ideal is far from reached but incrementally sought.

I’m finally letting go of the narrative that the southern half of the United States is uniquely responsible for American race relations. Politicians compromise, collude and compete with one another. Roosevelt’s challenges are today echoed in the revisionist policies of Trump and his Attorney General Jeff Sessions.

I am conflicted concerning Rothstein’s mitigation of his facts. On one hand I wanted to feel the author’s righteous anger at the injustices he so well illustrates. I believe, however, that the neutral academic tone of his work will prove itself useful as America continues to have difficulty confronting race and privilege. Despite this point, The Color of Law is an important addition to the confusing, convoluted mosaic of what, who, and how our experiment in democracy has developed and continues to evolve.