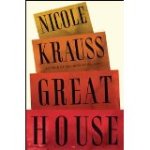 I have come to know myself as a book hugger. It only happens to a few lucky books and it really takes a lot for me to want to take that hard, short spine in my arms and embrace it as a friend, also as a somewhat obsessive and envious fellow writer. My most recent book hug was with Nicole Krauss’ “Great House”, and great it was.

In this marvelous novel of humanity, vulnerability, loss, love and worldly chaos, Krauss uses the simple object of a desk to stir up a whirlwind of interconnecting stories. This strikes me as a remarkable thing to do, to use something inanimate and familiar in order to dig up the most honest insecurities, doubts and discoveries in her character’s lives. And while this desk is important, it is also utterly disposable because the real meat, the real beauty lies in the characterization and the tiny stories that hold large quantities of mortal humanity in them.

A multitude of lives are inter-crossed through the constant recycling of a desk that originally sat in the study of a Polish Jew before his life was shattered by the Second World War. At first, I couldn’t seem to grasp how all these people were connected, why they were relevant to one another besides for the commonality of once having owned this large and overpowering desk, but as I continued to read, I realized that sometimes even the most subtle and seemingly trivial ways people connect in real and often haunting situations can lead to an incredible story and Krauss knows a good story. She knows how to develop the voices, the nuances and the sometimes brutal and devastating honesty of her characters that stir you into a deep, emotional awakening.

How does she do it? I wanted to know because I too want to write stories that might one day cause a reader to hug my cardboard spine. It’s all about the building; Krauss layers and not always with beautiful bricks. Her characters are whole but not necessarily enjoyable. Never flat, but so round they can barely fit through the door, their baggage is real and sometimes quirky enough that you can imagine that yes, people are keeping secrets like this. Often times I find that characterization gets sick with flatness and familiarity, but Krauss is so detailed in building and revealing her characters that you know this person, you feel as if you have been privy to peek into their closed curtains. Reading Krauss’ novel makes me want to go back to my own, to start to undress my characters and be sure that they are whole, that I’ve remembered every nuance. Because I strongly believe that Krauss knew even more of her characters then she eventually revealed to the reader and I truly think this is a secret tool to creating fictional people. Each chapter is written in the first person of a different character’s voice (some voices repeating again in second chapters) and while the chapters are not titled by the character’s names the reader can still easily distinguish between the multitude of voices. Now that is effective and successful characterization. To know these people, to wish their stories were never ending is beauty. And on top of all this, her prose is gorgeous.

Once again, the novelist, Nicole Krauss has gotten me to wrap myself around her book both physically and emotionally. A book to read for pleasure and for craft. 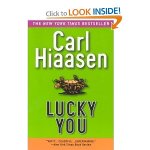 Hiaasen opens with a great device for character backstory in LUCKY YOU: JoLayne Lucks buys a lottery ticket. “The significance of her Lotto numbers was this: each represented an age at which she had jettisoned a burdensome man.” It tells the reader so much about her history in a compact and amusing way. He ratchets up the tension from the beginning by painting antagonists Bode and Chubb as not only racists, but major trouble, with the potential for violence; protagaonist JoLayne is characterized as beloved, with an altruistic plan for her half of the $28 million jackpot. The three are set on a collision course that occurs on page 51 of a 449 page book, “She was sitting at the kitchen table, working up the numbers on a pocket calculator, when she heard a sharp knock from the porch. She figured it must be Tom, the newspaperman, giving it one more shot. Who else would be so brash as to drop by at midnight? The screen door opened before JoLayne got there. A stranger stepped into her living room. He was dressed like a hunter.” It’s chilling, but then Hiaasen draws back from the violence – though not its aftermath – to preserve the comic structure.

Hiaasen balances a number of improbable stories, weaving them in and out of each other in a novel that is both caper and farce. The writing is solid and mostly straightforward. He creates a cast of bizarre characters, types that are easy to ridicule, from wannabe neo-Nazis to avaricious religious shrine builders. The main challenge he sets for himself is keeping all his balls in the air. He doesn’t fully succeed, but it’s not a distraction thanks to the pacing. The character of the spineless editor, Sinclair, could have been cut, as well as the subplot involving the Mob. Neither add to the story and, at times, detract. Hiaasen is good at creating bad guys and Chub and Bode are no exceptions. They are despicable human beings and it’s a relief to see their demise. It did bring up the question of whether if it would have been a more interesting challenge to find a way not only to punish them, but to find some kind of redemption. Hiaasen may also have missed an opportunity to throw in a real miracle more closely tied to the man-made frauds to bring more warmth to his humor. He has a character who drills holes in his hands and feet to collect stigmata money from tourists. For a book containing the warning headnote that “there is no approved dental use for WD-40,” it is clear that pushing the envelope is not a concern. It would have been funnier to have the stigmata man healed overnight from his self-inflicted wounds. This, however, does fly in the face of what is essentially a jaded authorial viewpoint that parallels that of his journalist/protagonist, Tom Krome.

In terms of my own writing, Hiaasen taught me not to toss too many balls in the air. He also provided a model for a credible happy ending. His descriptions are vivid, as when he describes what happens to Chub after sniffing glue. “He was completely unaware that his wounded mitt hung so tantalizingly in the water, just as he was unaware of the cannibalistic proclivities of Callinectes sapidus, the common blue crab. In fact, Chub was so blitzed that the sensation of extreme pain – which ordinarily would have reached his brain stem in a nanosecond – instead meandered from one befogged synapse to another. By the time his subconscious registered the feeling, something horrible was well under way. His screams ruined an otherwise golden morning.” He paints a convincing portrait of a low-life passed out with an injured hand in the water and a giant crab fastens on and won’t let go. It’s a satisfying piece of revenge. Hiaasen also teaches different and creative ways to satisfy the reader’s innate sense of justice throughout. He goes over the top more than once, but his novel is so entertaining, that its flaws are quickly forgiven.