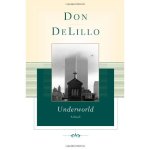 It’s not about baseball. Thank god it’s not about baseball. Because it’s a tome. That’s to say it’s huge. 800 pages. I don’t particularly like baseball.  It’s linked shorts.  At least I treated it like linked shorts and in summary I would say that I picked it up and put it down a lot and it took a long time to read. It’s brilliant and stunning, but as a reader, you are unsure at times whether it is brilliant or insane. As a writer, this novel proves to be a great example of dialogue and description. I can’t cite all the incredible dialogue in this novel or I would bore you, even though it’s good, really, really good.  There was a contest to write an entire short story in dialogue, just dialogue; I think they allowed dialogue tags, but that was it. I wish I read this novel before I entered that contest.

Here is just a small example of DeLillo’s dialogue:

“Hey Bobby. There’s something we want to tell you.”

“You see I’m working over here?”

“Hey Bobby.  Juju wants to tell you this one thing.”

“Shit in your fist and squeeze it,” Nick said.

Amazing. All the way through the punctuation, the drawing out, the repetition. That is real dialogue. Then there’s the incredible analogies or metaphors or similes whichever you want to call it.  For the sake of this review they will be referred to as ‘descriptions’

The hand going to his midsection to mean he’s already eaten or peanuts give him cramps or his mother told him not to fill up on trashy food that will ruin his dinner.

urgent sexual throb of the dishwasher

a living rebuke to the tactics of moderation

she was all ovals and loops, like the Palmer handwriting method

This was the one that really got me, that sent me reeling off the page and into the banks of my memories.  He was writing here of what happened after the “shot that was heard around the world.”  Which was on October 3, 1951 when the New York Giants played the Brooklyn Dodgers and in the ninth inning, Ralph Brancha pitched to Bobby Thompson who hit the ball into the stands for a three-run homer, beating the Dodgers 5-4 and capturing the National League pennant:

They are tearing up letters they’ve been carrying around for years pressed into their wallets, the residue of love affairs and college friendships, it is happy garbage now, the fans’ intimate wish to be connected to the event, unendably, in the form of pocket litter, personal waste, a thing that carries a shadow identity-rolls of toilet tissue unboltingly lyrically in streamers.

This made me think of my own ‘happy garbage’ – how I used to carry around a letter that was sent to me by a friend when I was living in a group home in Pacific Palisades. He wrote me a letter telling me he thought of me often, that I was loved. Let me know he was thinking about me. I kept that letter folded in my wallet long after that time.  Till it was thin paper ripped in the creases. Little flakes of white rolling off. He died. I have no idea how or why. This passage made me think of that happy garbage I kept in my wallet.  Made me think of sitting with a boy from New York looking out at some mountains in Bel Air and telling him how I was imagining myself lying on my side and tumbling down it. How it looked so easy. I asked if he would go with me. He said yes.

In a way DeLillo accomplished what he stated here in his epilogue not just for himself, but for me the reader/writer/sniper, in what could have been the most beautiful passage I’ve read in 2010:

you try to imagine the word on the screen becoming a thing in the world, taking all its meanings, its sense of serenities and contentments out into the streets somehow, its whisper of reconciliation, a word extending itself ever outward, the tone of agreement or treaty, the tone of repose, the sense of mollifying silence, the tone of hail and farewell, a word that carries the sunlit ardour of an object deep in drenching noon, the argument of binding touch, but it’s only a sequence of pulses on a dullish screen and all it can do is make you pensive — a word that spreads a longing through the raw sprawl of the city and out across the dreaming bourns and orchards to the solitary hills.