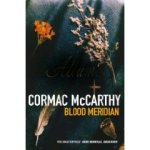 Blood Meridian is violent. I say that not as a critique or a compliment. I say that because it is what the book is about. There is very little central tension, aside from a little bit of “father-son” uneasiness between “the kid” and “the judge.” But what made me keep reading, page after page after page, was the new depths to which the characters were falling, the necklaces made of human ears and the male genitals cut off and stuffed inside mouths and the babies whose skulls were smashed on rocks. It was like watching a car accident. And all of this would have been a problem — would have made the book no more than a textual grindhouse film, really — if the sentences weren’t all perfect, if the voice wasn’t so gripping, and, most importantly, if the violence wasn’t there to make us fundamentally reimagine the “old west” that we so often romanticize.

After reading No Country for Old Men, I was expecting Blood Meridian to be violent and minimalist. I was expecting a matter-of-fact, rural, rustic voice that would describe the most unconscionable things I could imagine as if it were describing fabric softener. And there is some of this. Wisely, I think, McCarthy’s narrator does not graphically describe a lot of the more terrible things that happen in the novel. For example, “He took a skinning knife from his belt and stepped to where the old woman lay and took up her hair and twisted it about his wrist and passed the blade of the knife about her skull and ripped away the scalp.” This is disgusting to read, but it sounds almost like a description of a medical procedure. We don’t feel the murderers’ regret or disgust or anything of the sort. McCarthy allows the reader to fill all that in. And it’s almost more terrifying that way.

But Blood Meridian is a better book than No Country for Old Men because it does something more than this. McCarthy, in this book, is not so minimalist that he doesn’t allow the images to breathe. For example, there’s an image of “the judge” walking through the desert with a parasol made of human bones and hide walking a crazy man like a dog seeking out “the kid” in order to kill him. Or the image of a dancing bear being shot for no reason at a saloon while a little girl weeps as it bleeds out. Or the image of “the kid” wearing a necklace of human ears while a group of teenage boys ask him why all the ears are black in they’re Indian ears and not the ears of black people. I could go on forever. These images are so powerful and so disturbing that they almost work as a reason to keep reading on their own. And because the novel is a historical one (it was heavily researched and is based on historical accounts of that era), we keep reading especially because we know there is an element of truth to it.

So here we have a novel, often cited as one of the best novels in recent American history, that fails to really have much of a story in the way we would generally think of it. It starts with the destruction of a priest and ends with the destruction of a bear. Nearly everyone dies. People meander around the west killing people. Every once in a while, the Judge and the Kid get in a fight. None of this kept me going. Instead, it relies quite a bit on its “historical,” “research-driven” nature to keep the reader going. It also relies heavily on images instead of a central tension, especially given that “the kid,” who is someone whose survival we at least nominally care about (and therefore could be that central tension), disappears for large swaths of the novel. Despite all the “weaknesses” an MFA program would see in this book, I couldn’t stop reading because of these two things.

I loved his style and his approach. That said, I’m not sure I would want McCarthy’s nightmares.

One thought on “Blood Meridian”